Let's Explore the History of Cheese

We'll Uncover Some Unusual Facts
About This Amazing Food

Let's go back in time, to the very beginning so that we can explore the history of cheese and uncover some unusual facts about this ancient and popular food.

The exact origins of cheese (when, where and how?) are a mystery, but the consensus opinion among those who have delved extensively into the history of food and drink - has laid out the following general timeline.

Around 7000 BCE, about the time animals were first domesticated by man - The When), cheese first appeared, probably in the “Fertile Crescent” - the area between the Tigris and Euphrates rivers, in what is today known as Iraq - (The Where). Two theories have emerged as to - The How. The first sounds like folklore, but makes an interesting story.

The history of cheese probably began when a nomad, traveling with a camel, was about to set off on a journey through the desert. In preparation for his hot, thirsty journey, he filled his saddlebag, made of a dried sheep’s stomach, with milk and set off. 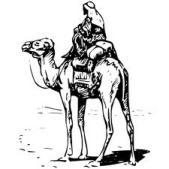 When he stopped some hours later for a drink, he found his milk had separated into some white solids (the curds) and a watery, milky fluid (the whey). How did this happen? There were 4 essential ingredients to the process: start with milk, add the “stirring motion” induced by the rocking walk of the camel, add the hot heat from the sun and finally, the rennin (digestive enzyme) from the sheep’s stomach. Et voilà - cheese! Thus began the illustrious history of cheesemaking!

The second theory suggested that when men put milk out as an offering to the Gods, they noticed that the milk became thick when it grew warmer (the effect of heat - whether the sun outside in warmer seasons or the fire in the cave where they lived). So the milk would curdle and if the liquid was drained off when the milk was placed in a container, such as the dried stomach of a sheep, the curdled mass became firmer, a very soft cheese.

The first pictorial evidence for cheesemaking was found on a frieze at the Temple of the Great Goddess of Life, Ninhursag, in Mesopotamia dating back to 3,000 BCE. The frieze illustrated how milk was processed into cheese. These very early cheeses would have tasted slightly sour, salty, somewhat similar in texture to feta or cottage cheese.

By the time Greece was at its pinnacle, historically speaking, cheese had become a celebrated part of daily life. Homer in his Iliad (800 BCE) referred to “Fig rennet coagulating the milk quickly”. In the Odyssey, the one-eyed giant known as the Cyclops, Polyphemus, tended peacefully to his cheesemaking, pouring curdled milk into the woven baskets in his cave. But sadly the Cyclops is better known for crushing and devouring some of Odysseus’ men when they were trying to journey home from the Trojan War. Then as now, travel was difficult!

“A country without a fit drink for cheese has no cheese fit for drink.”

Greece was the first country to prove its epicurean fitness, according to the old saying above, for it had wine to tipple and sheep's milk cheese to nibble. The classical Greek cheese has always been Feta, and no doubt this was the kind that Circe combined most suitably with wine to make a farewell drink for her lovers. She put further sweetness and body into the stirrup cup by stirring honey and barley meal into it. Today we might whip this up in an electric mixer to toast her memory.” (credit: The Complete Book of Cheese by Robert Carlton Brown via Project Gutenberg’s eBook).

Cheese had an important status during the days of the Roman Empire and indeed, the history of cheese might be far, far different without the contribution of Rome and Roman armies to expanding trade. Cheesemaking had become a mature craft and it spread with the Roman army and traders to the furthest reaches of the Empire. Cheesemakers had learned how to produce drier cheeses which could travel without spoiling.

Many cheeses which are well-known today were first produced and recorded in the late Middle Ages. For example, Cheddar in 1500 CE, Parmigiano-Reggiano in 1597, Gouda in 1697 and Camembert in 1791.

France had an uninterrupted history of cheesemaking and today is known for well over 400 cheeses. But in its early days in France, cheese remained very much a local product, simply identified by its geographical origin. For example, the cheese from Brie, the cheese (Camembert) from Normandie.

A Big Cheese for the White House: The True Tale of a Tremendous Cheddar

Based on a true moment in American history, this funny picture book celebrates the ingenuity and community spirit of one small New England town as it attempts to make the country's biggest cheese for the nation's greatest man. A Children's Book of the Year, Bank Street College

Click the image or the link below to order your copy today!

A Big Cheese for the White House: The True Tale of a Tremendous Cheddar

In Britain however, Henry VIII threw a temporary monkey wrench into the history of British cheesemaking when he closed down the monasteries in the mid 1530s. Monasteries were important centers of cheesemaking. But all was not lost! Cheese was too well established on the menu, both at court and among the common folk, to disappear. Today the British Cheese Board has identified more than 700 distinct local cheeses.

Until the 19th century cheese remained a local product, produced in small batches on farms. The first factory for industrial production of cheese was established in Switzerland in 1815. In the U.S. large scale cheese production began to grow in the mid 1850s when Jesse Williams, a dairy farmer from upstate New York, started making cheese in an early assembly line fashion, using milk he purchased from nearby farms. In subsequent years 100s of dairy associations were established, primarily in the northeast and in Wisconsin.

Thanks to mass-produced rennet (an essential ingredient in cheesemaking) and the development of pure microbial cultures around 1900, cheesemaking became standardized and factory-made cheese became the norm, overtaking traditional, artisanal cheesemaking by WWII. ( A sad time in the history of cheese….)

Fortunately over the past 30 years the world has seen a renaissance in the craft of making gourmet cheeses, drawing upon the history of cheese and its cheesemaking traditions, with an explosion of new farm-based cheesemakers producing the highest quality specialty cheeses in small batches. This brief look at the history of cheese would not be complete without acknowledging the contributions of two American women cheesemakers.

In fact the trend back to artisan cheese in the U.S. was started by several women artisan cheesemakers, notably Mary Keehn (Humboldt Fog cheese) and Cindy Major (Vermont Shepherd cheese). The contrast between mass-produced “cheese foods” and today’s small batch, handcrafted cheeses has never been greater.

Hooray for the contrast! As cheese lovers, we have a duty to support and encourage our dedicated artisan cheesemakers!

Cheese! Despite its many uses and variations, there has never before been a global history of cheese. Here at last is a succinct, authoritative account, revealing how cheese was invented; where, when, and even why. Click on the above image to place your order and delve into the glorious history of cheese! - G.C.D.

Cheese and Culture: A History of Cheese and its Place in Western Civilization by Paul S. Kindstedt

Behind every traditional type of cheese there is a fascinating story. Viewing human history through the eyes of a cheese scientist, this refreshingly original book will appeal to anyone who loves history, food, and especially good cheese. Click on the above image to get a copy for yourself! - G.C.D.

The History of Cheese Making in New York State by Eunice R. Stamm

The history of cheese making in the empire state from the early Dutch settlers to modern times. A fascinating read. Click on the image to order your copy! - G.C.D.

Cheese: The Making of a Wisconsin Tradition by Jerry Apps

How Wisconsin became the number one cheese producer in the US. The narrative comes from the cheese makers, milk haulers, cheese graders and buyers, with stories of snow-blocked roads and frozen milk, of fish in the milk cans, wine in the cheese cellars, and the early resistance toward "western" cheese. One terrific read! Click on the image above to get your own copy! - G.C.D.

One of the San Francisco Bay Area's most acclaimed culinary spots and equal parts bakery, cheese store, pizzeria, and gathering place, the Cheese Board is a patchwork of the local community, where a passion for good food runs deep. Includes a history of the store and over 50 duotone photographs that capture the food and personality of The Cheese Board. Click on the image above to place your order! - G.C.D.