How Can You Select
The Best French Cheeses? 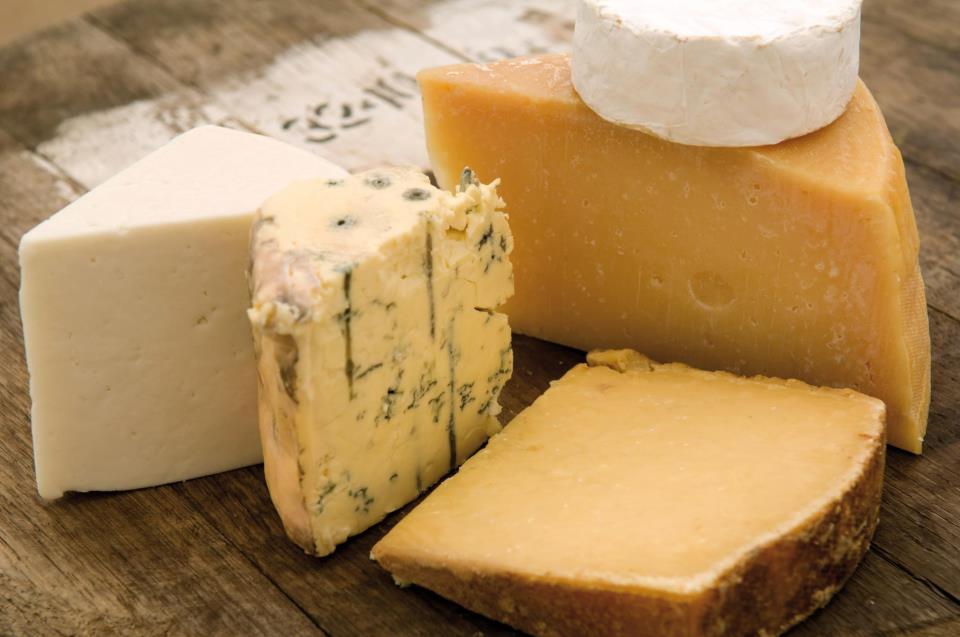 All handcrafted, artisanal and farmstead (fermier) French cheeses have a special mystique, reflecting their makers, terroirs and historical traditions ... and they seem to soar above all others when they are lovingly made, aged to perfection and consumed when exactly ripe (à point).

French cheeses can range from the most delicate and mild to the most robust, strong and "stinky". They can be a meal in itself, with a crusty baguette and a bottle of local wine ... or they can be a sublime finish to a gourmet meal.

Whatever the choice, cheeses from France tickle the palate, and combine artistry with science and ancient tradition.

Here is Part 2 of my list of Outstanding French Cheeses ...

8. A.O.C. Morbier, produced in the Franche-Comté region of eastern France, is a semi-soft French cheese made from raw or pasteurized milk. As is so often the case, the A.O.C. raw version is a stand-out, when compared to the pasteurized milk versions, but sadly only the pasteurized versions are available in the U.S. Look for the Brunnerois brand, in the U.S. and in France. When in France be sure to check labels to verify that the Morbier has been made in the Franche-Comté or Doubs region.

Historically, Morbier was made from a combination of two layers of cheese: the first layer came from the morning milk production and was then covered with a thin layer of ash to protect it from pests; the top layer came from the evening milk production. Today the layer of vegetable ash is purely decorative and often Morbier is made from the milk of just one milking. Morbier is fashioned into large wheels weighing up to 16 lbs. It boasts a pronounced flavor with layers of complexity. It should have a thick, creamy texture; the paste is ivory to pale yellow in color and the rind should be smooth, orange to brown in color. Similar cheeses for comparison purposes would be Tommes de Savoie and Saint-Nectaire.

Good news! An authentic Franche-Comté raw-milk Morbier is available in the US - look for Morbier AOC Badoz from Fromages Corses at your local cheesemonger's shop. Thank you to Jennie Gregory from the Good Food Store in Missoula, MT, USA, for sending in this gourmet cheese update! - G.C.D.

9. The region in S.W. France near the Pyrénées and Basque country is renowned for its sheep milk's cheeses. The top contender for one of the best French cheeses here is A.O.C. Ossau-Iraty-Brébis Pyrénées, an ancient cheese some say dates back to at least 1000 B.C.E.. A semi-hard, uncooked cheese, Ossau-Iraty is made from raw sheep's milk, with notable butterfat content. Non A.O.C. versions are made from pasteurized sheep's milk. (Look for Etorki, Prince de Claverolle and Esbareich brands - these non A.O.C. versions are called, simply - Iraty.)

Acording to A.O.C. regulations, A.O.C. Ossau-Iraty must be made from the milk of the Manech and Basco-Béarnaise sheep from local herds of this region. It must be aged for a minimum of 90 days (thus one can find the A.O.C. version here in the U.S.); its minimum butterfat content must be 40-45%. The best Ossau-Iraty (look for Abbaye de Belloc brand) will be found in the cheese shops from March to May, having been made from milk produced high in the mountains 6-8 months earlier. This Ossau-Iraty will reflect strongly of its distinctive terroir. It will have a full, rich flavor with herbal and nutty undertones. Its texture is supple, slightly granular and the interior paste will be ivory to pale yellow, marked with a scattering of tiny eyes.

10. A.O.C. Pont-L'Évêque is a renowned and very old cheese from Normandy. Classified as a washed-rind semi-soft cheese, Pont-L'Évêque has a distinctive orange-yellow rind, marked with cross hatching, which becomes more and more sticky as it ages. Typically the cheese is aged for 2-6 weeks so in the U.S., only the

pasteurized cow's milk Pont-L'Évêque versions can be purchased. This cheese is always packed in small square wooden boxes. Look for Levasseur and Graindorge brands. As it ages, the texture of the cheese will become more creamy, but should not be runny. The flavor is mild and sweet, belying the very strong "stinky" aroma of the cheese. There should be small scatterings of eyes throughout. The brands to look for in France for A.O.C. Pont-L'Évêque are: Levasseur, Bisson et fils and Lepeudry.

11. A.O.C. Reblochon is a grand mountain cheese made from raw cow's milk produced by the Abondance or Tarentaise cattle in the Haute-Savoie (Rhône-Alpes) region of east-central France. This is a washed-rind cheese with a bone-colored paste, very mild and buttery to the taste. It is typically aged for 50-55 days which means the A.O.C. raw milk version could not be imported to the U.S.. However, some producers now age their Reblochon a few days longer to exceed the mandated 60 days, and they make it a little firmer, so that occasionally you can find true A.O.C. Reblochon here in the States.

There are two versions you might find here or in France: the fermier cheese (produced from milk of cows raised on the farmstead where the cheese is made) which will have a green label in the rind - and the laitier cheese (produced from milk from several local sources), which will have a red label in the rind. Always look for the label to see the words Haute-Savoie or the town names such as Thônes or Le Grand Bornand, for example. The cheese is distinctively packaged - always packaged between 2 very thin wooden disks and wrapped in paper. It comes in 2 sizes ... always buy the 1 lb. size!

An interesting story revolves around the name Reblochon. The word comes from the verb reblocher which means to milk a second time. In the middle ages, the serfs were required to turn over the major portion of their day's milking to their Lord. So they developed the practice of not completing the first milking, thereby reserving thicker, richer milk for themselves when they completed the second milking in the evening!

12. No list of favorite French cheeses would be complete without the inclusion of A.O.C. Roquefort, which has its own page on this website.

13. A.O.C. Salers ... also known as Fourme de Salers is a rustic, authentic fermier mountain cheese. It dates back 2,000 years or more and today, there are only about 5 fermier producers left in the Cantal Mountains, part of the Massif Central in the Auvergne region. Salers has the distinction of being the ONLY French fermier cheese - there are no other versions made, whether in dairies, factories or cooperatives. A.O.C. regulations state that it must be made from May through October, from milk produced by the chestnut red Salers cows, grazing at high mountain altitudes. Thus the cheese is handmade in small stone huts (burons) high in the mountains. This is a raw cow's milk cheese and is not available in a pasteurized version. Since it is aged from 3 months up to 18 months, it is available in the U.S.. It's fashioned into tall and large wheels, weighing up to 120 lbs! A natural rind, semi-hard cheese, the rind becomes very hard and thick as it ages and will be a yellow to dark brown color. The interior paste will be medium to dark yellow, with the texture firm, a bit cheddar-like though not as dense as a good Cheddar cheese. You should try Salers at least once to experience the robust flavor of an authentic, mountain cheese. Although it is part of the Cantal family of cheeses, it really stands on its own. The flavor will reflect the high mountain terroir, with complexities, floral and herbal undertones; it will taste sweet, nutty and meaty. Any brand of A.O.C. Salers you find should be excellent!

Click on any of the images above to order a sampler. Enjoy some fine Gourmet Cheeses today! -- G.C.D.

14. A.O.C. Tomme de Savoie is a regional name for this natural rind, semi-soft to semi-hard cheese which can be found in many guises: artisanal (handmade from milk from several local sources); fermier (handmade from milk produced by cows raised on the same farmstead where the cheese is made); made by a cooperative using milk from different dairy members; factory-made. It's produced in the Haute-Savoie area of the Rhône-Alpes region. Please note that it's important when selecting a Tomme de Savoie to check the label on its box. Non A.O.C. versions, made from pasteurized milk would say ... aged (affiné) en Savoie. The true A.O.C. version will say ... made (fabriqué) en Savoie and it will say that it is made from raw milk (au lait cru).

The thick, rustic and crusty rind of a Tomme de Savoie is distinctive; it will be bumpy, brownish to russet in color with splotches of yellow and/or red mold showing. The interior paste will be sticky, riddled with small eyes and the texture should change from soft and supple to more firmness as it ages. Typically a Tomme de Savoie will be aged for 2-3 months before it is packed in small wooden wheel shaped boxes. Its aroma should be slightly damp smelling - like wet straw or grass and there should be just a tiny hint of ammonia to the smell. This is a peasant, everyday type of cheese with no pretensions. The flavor is delicious, simple, savory. A top choice on the list of great French cheeses!

15. For centuries both France and Switizerland made virtually identical Vacherin Mont d'Or cheese on Mont d'Or (the mountain), located in the Franche-Comté region of eastern France. It was not until 1981 that France was awarded the A.O.C. designation for its version, which is now called ... Vacherin du Haut-Doubs, or sometimes just Mont d'Or. Vacherin Mont d'Or, made in Switzerland, differs mainly because it is made in both a raw milk and a pasteurized milk version, whereas the French cheese is made only with raw milk, as per A.O.C. regulations. Further, it can only be made from milk produced in fall through winter by cows fed only sweet, dry hay.

In France look for the Badoz brand. In the U.S. we can only buy Vacherin Mont d'Or in the pasteurized Swiss version, BUT these "faux" brands are truly excellent and equally as good as any raw milk version you will find in France. Look for Edel de Cleron or Écorcé de Sapin. These are washed-rind cheeses, aged a minimum of 3 weeks. They are distinctively packaged as each cheese will be banded with an aromatic strip of pine bark which infuses the cheese with a woodsy flavor. They are then packed into wooden wheel-shaped boxes. The pine bark strip is needed to contain the cheese, which will ripen into a delightful ooze. The flavor will be delicate, woodsy, luscious ... and the cheese, when properly ripe, or a point, will be spoonable. So best to leave the pine strip in place when serving. Just cut off the top of the rind and spoon out the custardy interior. This is a very special cheese! Take note!

You might want to check out my page on Pairing French Cheeses with Wine because you will surely want to select a bottle or two of wine to accompany the cheeses you've now decided you want to buy and try! Click on the links below.