Stilton Cheese:
King of the Blues! 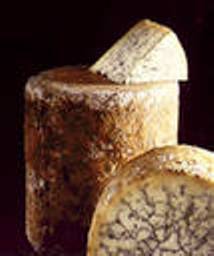 Taste a wedge of Stilton Cheese - the real thing - and your life will be changed. Even if you never liked Blue Cheese, you will love this one!

Stilton - is the only name-protected cheese in Britain - unlike in France where name protection is common. It may seem odd that there is NO Farmhouse Stilton produced anymore, even though Stilton is indisputably considered the King of Cheese in Britain, and one of the Kings of Blues worldwide.

Instead, the best Stilton is produced by specialists in large cheesemaking facilities in its home territory or legal domain in Leicestershire and Nottinghamshire (Robin Hood's territory).

Regulations do require that both the milk and the manufacture of Stilton cheese MUST be produced in this specific area...and the makers MUST follow recipe and aging guidelines set forth by the Stilton Cheesemakers' Association. The end result or quality of Stilton is unfortunately not regulated, so you should select Stilton cheese carefully when purchasing.

The British High Court defines Stilton as ... "A blue or white cheese made from full-cream cows' milk with no applied pressure (in the making or forming), that could be pierced, but NOT inoculated, that forms its own crust or coat and that is made in a cylindrical form, the milk coming from English dairy herds in the district of Melton Mowbray and surrounding areas falling within the counties of Leicestershire, Derbyshire and Nottinghamshire."

Notice that the statement does NOT specify whether RAW or PASTEURIZED milk is to be used. As I have pointed out throughout the pages of this website, quite often the very best cheese is made from RAW milk - most experts would agree. But Stilton cheese is the exception. Today it is always made from pasteurized milk and when you taste one of the best Stiltons ... you are in for a remarkable experience!

Creamy, moist, rich and complex in flavor, it has a huge aroma when served at room temperature. Stilton is typically aged from 6 to 18 months. The blue-green veins throughout occur naturally as it ages, through piercing with a long needle during the aging process.

This allows air to circulate and promote bacteria growth. Also, the soil in the legal domain of Stilton contains iron which many believe helps contribute to the blueing of the cheese. Roquefort, on the other hand, does not acquire its blue veins naturally; instead powdered, moldy rye bread crumbs (penicillium roqueforti) are mixed with the Roquefort curds thus feeding the bacteria which triggers blue veining.

The Stilton story began prior to 1720 and the "secret" recipe involves 2 curdling processes. The curds come from the cream from the evening milking, mixed with the full fat milk of the next morning's milking. In fact it takes 17 lbs. of milk to make one 15 lb. drum of Stilton cheese!

200 years ago one of Stilton's respected cheesemakers, Mrs. Musson, said..."Stilton cheese, with the exception that it makes no noise, is more trouble than babies."

When selecting Stilton, I recommend that you look for the name Colston-Bassett - this cheesemaker is head and shoulders above the others - a stand-out among British Classic Cheeses. 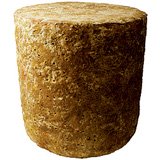 The crust should be dry, brown and rough. The paste should be ivory in color with uniform blueing throughout. Texture-wise, the cheese should be crumbly, but firm enough so that you can cut it into wedges without it crumbling into tiny pieces. In the U.S. it can be hard to find Colston-Bassett so you would do well to select J.M. Nuttall or Cropwell Bishop as alternative choices.

If you have never tried Stilton cheese, you owe yourself and your guests, a treat. Today would be a good day to run down to your cheese shop and buy a wedge.

Another cheese that must be included among the British Classic Cheeses is Double Gloucester, a semi-hard cheese made from the milk and cream from 2 cow milkings.

Typically aged from 6 to 9 months, the Farmstead versions are the ones to buy. They are cloth-wrapped, with hard, thick rinds which are beige in color and marked by shades of blue and gray mold. The interior paste of Double Gloucester is either pale yellowish (some is dyed) or white, and the texture will be firm, dense and boasting a richer flavor than the Single Gloucester cheese. It is a traditional British Classic Cheese, well-loved throughout Britain. Some might find it bland, or at least not as exciting as a Cheddar or a Stilton cheese. The best analogy would be to say that it tastes like a mild Cheddar. Appleby Farm, (which makes an outstanding Cheshire), also makes a great Double Gloucester. A second excellent alternative to look for is made by Old Ley Farm.

If you have not yet read about Farmhouse Cheddars, here is your opportunity.

Wonder what wine is a good match for Stilton or Double Gloucester?
Go to our Pairing British Cheeses page.

Go from Stilton Cheese to Cheddars