Britain's Gift to the World of Cheese 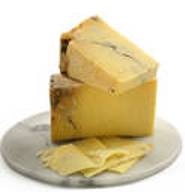 British Farmhouse Cheddars are renowned around the world for good reason. The name Cheddar comes from the process of manufacturing this cheese, called cheddaring. The raw milk and curds from Friesian cows are scalded twice and then the curds are cut and piled into blocks, so that the whey drains off. This process is repeated over several hours, with the blocks being cut into smaller and smaller pieces. As a result, the curds are broken into very fine particles which causes the texture of the cheese to be quite tight. The cheddaring process is actually exclusive to this cheese, although somewhat similar processes are used with other cheeses such as Cheshire, Lancashire and Double Gloucester.

What Makes British Cheddars So Distinctive?


Best Names, Hands Down Are:

While there are many other cheddars produced in England, the USA and elsewhere, Montgomery's and Keen's are THE names to look for. Montgomery's has been made for 300 years while Keen's is a relative newcomer, first made in 1899. If you prefer really sharp Cheddars, then Keen's would be the best bet for you. But you can never go wrong with either one. Be sure to try both of these fantastic British Classic Cheeses.

Another good choice would be Isle of Mull, from Scotland.

"Cheddar - today it is called "England's second-best cheese," second after Stilton, of course." (Stilton has long been acknowledged the King of British Cheesedom.) "In early days long ago, a large cheese sufficed for a year or two of family feeding, according to this old note: "A big Cheddar can be kept for two years in excellent condition, if kept in a cool room and turned over every other day." But in old England some were harder to preserve: "In Bath... I asked one lady of the larder how she kept Cheddars. Her eyes twinkled: "We don't keep cheese; we eats it."" (credit: The Complete Book of Cheese by Robert Carlton Brown via Project Gutenberg's eBook)

While not quite in the league of Farmhouse Cheddars, Caerphilly cheese is one of the top British Classic Cheeses. First produced in the area of Cardiff, Wales, Caerphilly became so popular that it is now made in Somerset County, England as well. Caerphilly is a semi-soft cheese made from raw cow's milk, as well as from pasteurized milk. The cheese is soaked in brine to help form the natural rind so that aged versions of the cheese will have a velvety coating of mold. (It is not wrapped in cloth like Farmhouse Cheddar.) The paste of Caerphilly is white to ivory in color; the texture will be moist and crumbly. More aged versions will be crumbly in the center but sort of creamy close to the rind. Typically Caerphilly is aged up to 6 months although it is actually ready to eat in just a few weeks. Flavor-wise, Caerphilly is creamy, buttery and milky - definitely not as dry as a Cheddar or a Cheshire.

A wonderful name to look for when buying Caerphilly is Walnut Tree Farm's Farmhouse Caerphilly, made by the Duckett family in Somerset.

It is available in the USA. Goyrwydd Farm's Caerphilly is another terrific choice, made in Wales from raw milk.

True Farmhouse Cheddars top just about everyone's list. But you'd be cheating yourself if you didn't try some Other Quirky, Notable British Cheeses, which you can learn about by clicking on the link below.

And keep in mind when you buy these cheeses, you will want to pair them successfully with some great wines, ales or ciders. You can learn more about Pairing Cheeses right here.

Check which British cheddar was chosen as one of the Best Cheddars in the World at the World Cheese Awards.

In 1869 the English cheesemakers - Green's of Glastonbury - gave a wedding gift to Queen Victoria - a giant 1/2 ton wheel of Cheddar cheese! The terms 'Big Cheese' and 'Big Wheel' originally referred to people who were wealthy enough to purchase a whole wheel of cheese (certainly not a 1/2 ton wheel, but even a full wheel of Cheddar weighs from 56-66 lbs!).

Go to Pairing British Cheeses with Wines, Ales and Ciders

The Better Cheese Cleaver for Cheddars

Swissmar Cheddar Cheese Cleaver in stainless steel. Great for cubing! Shipped in a clear gift box. It would go perfectly with the Five Cheddar Variety Gift Basket (left) for that special gift. Click on the image to order it today! - G.C.D. 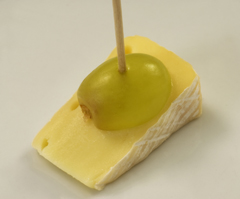