The Oldest Cheese Made in Britain 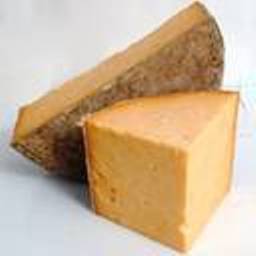 Taste a slice of Cheshire Cheese and you will grin like the Cheshire Cat! A favorite of the British Navy, it will be one of your favorites too!

"Cheshire is not only the most literary cheese in England, but the oldest. It was already manufactured when Caesar conquered Britain, and tradition is that the Romans built the walled city of Chester to control the district where the precious cheese was made.

Cheshire first came to fame with The Old Cheshire Cheese Inn in Elizabethan times and waxed great with Samuel Johnson presiding at the Fleet Street Inn where White Cheshire was served "with radishes or watercress or celery when in season," and "Red Cheshire was served toasted or stewed in a sort of Welsh Rabbit."

The Blue Variety is called Cheshire-Stilton, and Vyvyan Holland, in Cheddar Gorge suggests that:

"it was no doubt a cheese of this sort, discovered and filched from the larder of the Queen of Hearts, that accounted for the contented grin on the face of the Cheshire Cat in Alice in Wonderland." (credit: The Complete Book of Cheese by Robert Carlton Brown via Project Gutenberg's eBook)

Usually Cheshire is formed into cloth-wrapped drums which are 14 inches high with a diameter of 7-8 inches, weighing about 15 lbs. The drums are aged for 6 months up to a year. It is important that you seek out Genuine Farmhouse Cheshire which will always be stamped with the number of the farm where it was produced, the date it was made and a quality grading of either 'fine' or 'superfine'. It will be wrapped in cloth; it will rarely be waxed over the cloth.

The very best of the Farmhouse Cheshire is made by the Appleby family of Hawkstone Abbey Farm.

Other fine Cheshires are made by the Bourne family (The Bank brand) and some waxed Cheshires by Mollington Grange and Chorlton Lodge. Flavor-wise, Cheshire is rustic, not too strong, buttery and mild with a slighty salty, quintessentially cheesy flavor. (The soil in the Cheshire basin area has an underlying layer of bedrock salt which contributes to its distinctive flavor.) It is a dry cheese with an pale orange color since it is organically dyed with annatto. The texture of Cheshire is a bit drier than Cheddar, but it is crumbly like Cheddar.

Go to Pairing British Cheeses with Wine, Ales and Ciders