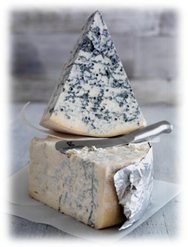 D.O.C. Gorgonzola may be one of the best known of the Blue Cheeses, along with Roquefort. Gorgonzola is a cow's milk Italian cheese, whereas Roquefort is a sheep's milk cheese, Roquefort is crumbly; Gorgonzola is creamy, moist and buttery. It is not a cheese for the faint-hearted or weak-nosed! Protected by name, Gorgonzola can only be made in the provinces of Lombardy and Piedmont. As with Fontina Val D'Aosta, Gorgonzola has its own consortium of producers to oversee production and ensure all D.O.C. regulations are followed.

The younger versions are mild in flavor, but strong in aroma. The more aged versions are strong, pungent and assertive both in flavor and aroma. The interior of the aged version is also whiter, with more pronounced blue veining. Originally the blue-green veining of Gorgonzola occurred naturally in the damp caves where it was aged. Today demand for the cheese is so great that modern techniques had to be introduced to speed up the development of the the mold and thus the veining process.

The cheeses with the most blue-green veining are considered premium Gorgonzolas (premium in price too!) So the cheeses are pierced to allow oxygen to enter. This is true for all commercial blue cheeses made today. Though most Gorgonzola is aged for 6 months or more, there are younger versions available.  The cheeses are formed into large 18 to 26 lb. drums, 9 inches high by 14 inches in diameter. The cheese is always wrapped in foil because the rind is relatively fragile. Each producer will have his own foil color and label design.  Some good makers to look for are Mauri, Guffanti and Arrigoni.

HOW TO MAKE A GORGONZOLA SAUCE